Success: Celebrating the Past, Embracing the Future

The Millat Industries Team celebrated their success from the first half of this year at our June All-Associate Bonus meeting. Along with sharing business updates, we welcomed two very special guests.

Josh Reffner, Manager at Honda North American Purchasing, presented our company with the 2018 Honda Value Award. Josh noted that in 2018, only 6% of Honda’s suppliers were recognized with an award, making this a notable achievement. Josh shared that although there may be uncertainties in what the future will look like (autonomous cars and electrification of vehicles), as long as Millat Industries and Honda position themselves as problem solvers and value adders, the future will be ours to create.

Millat Industries was also joined by Rick Chamberlain, the Head Coach of the University of Dayton Football Team. Rick is entering his 12th season as the Head Coach, and his 45th season at UD as a player, assistant coach, and head coach. UD Football is no stranger to success – of the last 42 seasons, UD has posted a winning record in all but two of them. The similarities between success in sports and success in business certainly aren’t coincidental – they both arise from team work. Rick shared some of the key factors that have led to UD’s success on the field, and as he said himself, he has been blessed with the “Voice of a Football Coach” to help him share it!

We continue to look toward the future, as our city’s namesake so clearly stated:

“My interest is in the future because I am going to spend the rest of my life there.” – Charles Kettering 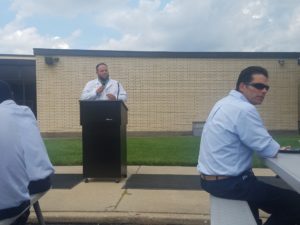